Inferno: A New Work about Sin @ the FLEA 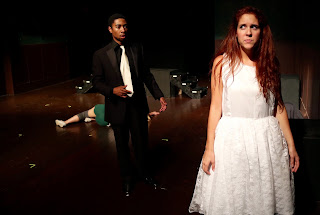 Ever since man could pick up a pen, the muses have inspired countless accounts of hell in all its grotesque grandeur. Why? Who knows. We are forbidden fruit junkies I guess. But every once in a while, you come across someone illustrating hell as maybe something smaller… not necessarily in scale but in concept. Like maybe there’s a little hell right inside you clamoring to get out?

Justin Giachetti wrote and directed a marvelous NEW work about sin called Inferno. Absolutely no current topic has been spared in the writing and editing of this masterful piece. I found myself squirming in my chair as images of bulimia, police brutality and a school shooting danced before my eyes in the intimate Flea Theatre down in TriBeCa.

Darin Earl II leads the ensemble as, you guessed it, Damian- a misunderstood giant of the devil incarnate. We find Earl appearing in vignette after vignette (a Sgt. General father , a pothead, a schizophrenic voice…) all the while commanding control and sophisticate nuance the duration of the sinners stories as well as his own. 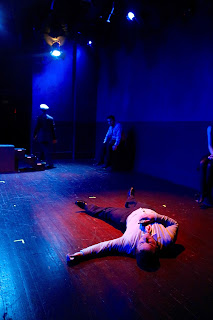 Liz Carlin plays his angelic opposite Phoebe- the love of his life who sacrificed herself. Carlin is an amazing antithesis to the collection of angst-ridden sinners and provides a new scope of suicides in the afterlife. Dressed all in white against a sea of black, Phoebe quickly becomes our voice box as to what is wrong in our world.

Other stand out performances are Joe Piserchio as Gus, a heavyset boy struggling with his homosexuality in the 1950s. Piserchio’s entire demeanor encapsulates that sugar sweet generation and the evils that lie beneath. Heather Baisley and Eme Bentancur led the ensemble of lost souls with eerie finesse. Baisley’s “Mama Rose” embodiment paired with Bentancur’s alcoholic father persona could shake even the hardest of hearts to the core.  Deborah Bjornsti plays a heartbreaking shell of a ballerina, Paul Rahter has his finger to the pulse on current police brutality, Dylan Scifo makes a damned good druggie, and Jenna Moschella will scare the shit out of you.

I found myself leaving the Flea a bit wiser and a bit more at ease. With all the goings on in the world these days, we need to find answers within art and communication. This is it guys. Will I see you in hell?

Posted by @entertainhourNYC at 11:36 PM
Email ThisBlogThis!Share to TwitterShare to FacebookShare to Pinterest