Hmmm- this is a tough one. 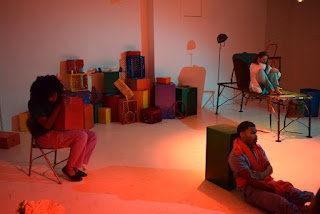 As a reviewer, I owe it to you all to speak of the quality, aesthetic, and pathos of the stories we are invited to see. And I do sit there, vigilantly, as if at a news site, absorbing all I can for you. But sometimes, things hit so close to home, your pen detaches from your psyche and you’re left alone.

Justin Moriarty’s “The Rounds” is a simple script. A simple story touching on the war on drugs and the soldiers who fight for their own survival. But an incredible young gentleman, Jonathan Schwolsky, took this story and devised a horrifyingly accurate world. And I would know, because I’ve lived in it.

With its origins in Maine, the troupe has traveled to Alchemical THEATRE LABto deliver a chilling production of soundscape, chilling movement and words that don’t leave you. The ensemble of three explore the exchangeability between patient and doctor; who is administering the drugs and who is taking them. And these are true stories from a real place, Spring Harbor Mental Facility, south Portland, Maine, you’d never think you’d ever hear.

I sat down with John for a bit after the show and he reminisced about the first time they performed this piece for the patients at the facility. “Someone after the show said to me ‘You hit this right on the head. Its interesting to see a doctor character suffering. He’s not a lowlife’ and all I could say was ‘neither are you.’” 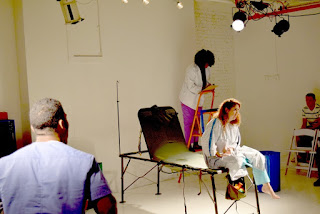 Schwolsky did tremendous amounts of field work for this piece. “It was an extremely immersive project. I lived alone for a long while and only surrounded myself with addicts.” This was more than evident in his genius traffic patterns and heavy movement pieces. It seemed to me that this wasn’t a director blocking, this was a therapist or friend telling a story, so streamlined, so nuanced and absolutely chilling.

The ensemble of three worked very well together, but the stand out performance of the evening was by Liz Carlin. Carlin had a lengthy monologue that concluded the show, which, while surveying my row, left people physically stiff while being completely engaged by her self examination and shifting essence.

Mike Deering’s compositions propelled the piece and kept it flowing. Deering sat in the corner and did it all live, punctuating every vignette and shift, and let me tell you- it was brilliant. Ashley Petix’s design was so damned smart and served the piece so well. Everything about the set was colorful yet sterile, a perfect mirror to a pediatrics office, catering to infantile wants and needs.


I leave you with this: just yesterday, another member of my circle has passed from an overdose. Can we please start allowing art to heal us? Schwolsky suggests that theatre now a days should be a social commentary and accessible to all. Go. Start with The Rounds. It may save a life.

Review: Brittany Goodwin
Photos: Jonathan Schwolsky
Posted by @entertainhourNYC at 9:36 AM
Email ThisBlogThis!Share to TwitterShare to FacebookShare to Pinterest